The 2020 Touring Car Masters series got off to a start on Feb 20 – 23 around the streets of Adelaide.

It had been 12 months earlier that the brand new Multispares Torana debuted. With some more testing/development in the New Year for the car and a “mind and body program” for our driver Ryan Hansford, the team rolled out the fresh looking A9X Torana full of anticipation.

Multispares and the team welcomed back all of the suppliers from last season plus the addition of Garrett. 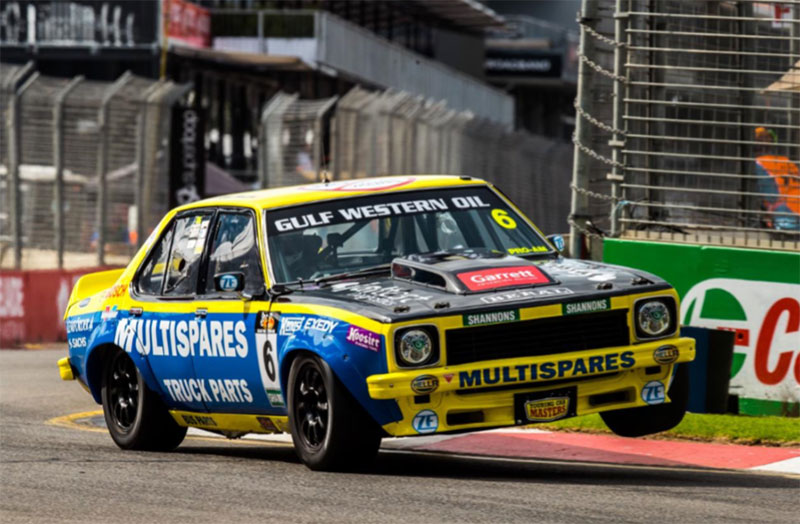 The schedule for Adelaide was one practice session, then qualifying, the trophy race (reverse grid), and then 3 races. With a big change to the shock absorber settings for Adelaide, Ryan hit the track early Thursday morning for practice and the race car felt great apart from over the those big Adelaide kerbs so 5th and only .7 sec was great considering we went out on used tyres when most of the field were on new tyres. Round 1 is the only round where you can use new tyres for practice but given how dusty and slippery the track is being a normal road, the team decided a good set of race tyres would give us a good idea of the car balance, where as a new set might mask an issue.

Qualifying was next so the Torana was given a another change in the bump and rebound in the shock absorbers and out went Ryan feeling good but not 100% sure where in the top 5 he would end up. The crew were confident and called it early…..”Go for pole” said crew chief Pete Phillips.

On only his 3rd flying lap Ryan did a super lap with all three sectors close to perfect and all three fastest of any car in the field. He had a huge margin so he and the team elected to pit and save those brand new Hoosier tyres. With just under half a second up his sleeve (.46) Ryan went back on track with a couple of minutes to go just so he could have another crack if needed, but no one was going quick by then, so he cruised around and into the pits to claim his second pole position in TCM, the first one being in Newcastle 2 years ago.

From last on the grid (due to his pole position) the trophy race was always going to be tricky as the Adelaide street track only has 2 or 3 places to pass, but after a good start and careful first lap Ryan managed to pick his way through the field and finished 7th. The car felt great and had tried another 2 clicks on the front shocks.

“The Multispares Torana was the fastest it had ever been at QR”, said Ryan. “But once again in P1 we needed to really get the shock to control the spring over the kerbs here in Adelaide. We made a adjustment after practice then another small one after qualifying.” He added. “I can’t wait for race 1. It’s going to be fast”

Race 1 was Friday afternoon and Ryan got an OK start. Adam Garwood in his 6 Litre Camaro had his nose in front in the first chicane so Ryan decided he would tuck in behind. John Bowe had different ideas and was very late on the brakes on the inside which was still dusty, locked up and slid into Garwood’s door which forced Ryan to take evasive action and all three cars ended up in the gravel trap. They eventually got the Torana out and Ryan finished 14th to salvage a few points.

“Well that was very disappointing” said Ryan after climbing out. “I just got out dragged by Garwood and then JB came down the inside and cleaned us both up. John has already apologised and he reallydoesn’t make mistakes so I’m just going to get out there in the next race and get through the field as far as I can”

Ryan then lined up 14th in race 2 and quite simply put on one of the best drives seen in TCM. He passed 3 or 4 cars on the first lap and got another two cars around the outside into the hairpin. He got to second mid race and then put his head down and caught the leader Adam Bressington with a couple of laps to go. On the last lap Bresso went to the inside into the hair pin so Ryan just out braked him, got the Torana turned and with the outside wheels up on the kerb got great drive out and grabbed the lead. Two more corners and Ryan had just delivered his, the teams and Multispares first Adelaide win.

Race 3 was mid-morning on Sunday with a good crowd in attendance and Ryan got a fantastic start and was never headed and won comfortably after Adam Garwood got it wrong under brakes into turn 2 and over shot the corner.

All in all, a great weekend considering the off in race 1. Ryan won his class for the weekend and finished 2nd overall with the next round being at Sydney Motorsport Park March 27 – 29.

“I really thrilled for Multispares and the team for our performance this weekend” said Ryan. “I felt like I’d won a world championship coming across the line in race 2”. I have won some races in my career but for some reason that one felt real good.” He added “I am already looking forward to round 2 in late March as the car started to get sorted there last year, just using up its tyres too much, which we have now sorted out late last year and improving again early this year.”

“Even better is that round 2 is the first round where all the races will be shown across Channel 7. Some races will be live on 7Mate, some live on the Seven network sport channel 7Plus and all replayed the week after, all free as part of the new Australian Racing Group’s new race meetings.”

“TCM will racing half its rounds with the Supercars and the other half with ARG so I’m excited TCM will get more exposure.” Ryan added
“Social media is also playing a hand at getting TCM out to the motorsport public. The in car footage of Ryan in Race 2 has already had 4150 watch it and with 8782 people sharing or clicking it is bound to go into the tens of thousands over the following weeks and months”. Said Brett Peters “The Trophy race was shared on You Tube and has already had 87,619 which at least twice the amount of views of all the other support categories shared on youtube.” Brett added.

It’s going to be an exciting season and thanks for all the support.