You are here: Home | News | Multispares Racing | Hansford heading back to Sydney

After finishing second overall in round 1 of the 2022 Touring Car Masters series Ryan Hansford and his Multispares Torana will be racing at Sydney Motorsport Park this coming weekend for round 2.
Friday May 27 will have practice and then qualifying will be held under lights at 6.15pm. At round 1 Ryan qualified on pole position so he will be keen to do the same again but as always it will be close with as many as 4 cars all capable of grabbing the top spot.

Saturday and Sunday both have two races each day televised live and ad free on Stan Sport along with the Supercheap Auto TCR series, Trans Am, S5000 and Porsche Sprint Challenge.
With a huge variety of classes it will be a terrific weekend of racing at the fast and flowing Sydney Motorsport Park.

“We won the round there in 2021, and finished 2nd earlier this year there when Supercars moved the Newcastle round to SMP because of covid.” Ryan added

“So I suppose if there was a track we had to do twice I’m pleased its here.” “Plus I have now raced there in the dry and the wet and the Torana is good in both so we will head back there with what we learned regarding tyre pressure last time and have a big go.” Said Ryan.

For those that missed Ryan’s drive in Race 3 at Round 1, we have upload some laps to YouTube where he goes from 5th to second in some great driving in tricky conditions. 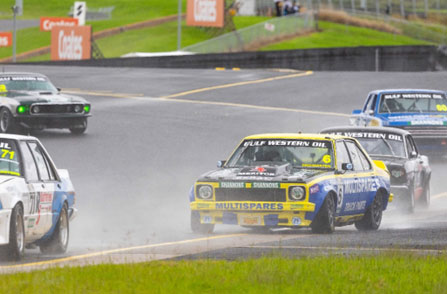 And don’t forget to see all the updates on the Multispares Racing Facebook page.