Round 2 of the 2019 Touring Car Masters series was run at Phillip Island where the series hasn’t raced since 2015.

The Multispares Torana had some major work done in between Adelaide and PI, the most important being the relocation of the weight ballast so the race car has better balance. In addition a new engine was built and the car was once again very fast at Queensland Raceway before heading off to “the island”.

Ryan has raced his Multispares V8 Ute at Phillip Island, and as many would understand still feels a little apprehensive being at the Island. 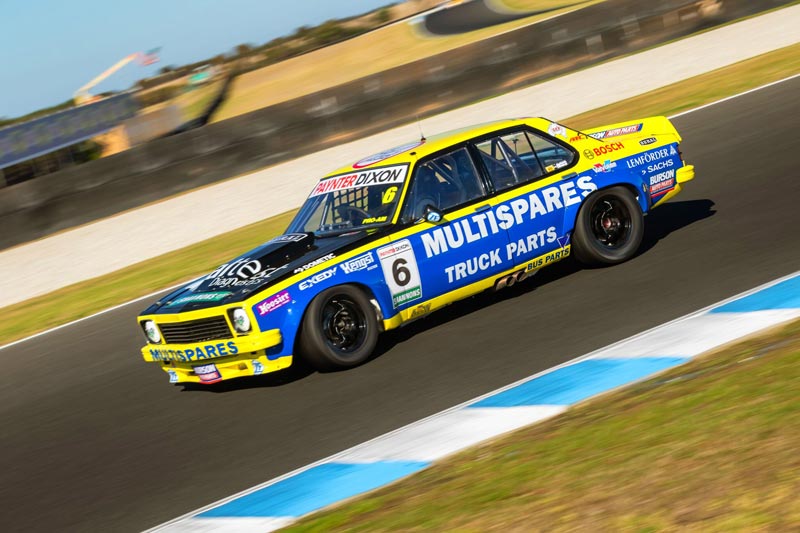 Brett Peters said, “Ryan’s dad Gregg was killed at Phillip Island in 1995 so whilst Ryan loves driving the Phillip island track, it’s always good for him to finish that first practice session. I wasn’t however surprised to see Ryan was straight on the pace and was 4th fastest, and he did seem more settled once he completed those practice laps”

Ryan was 13 years old in 1995 and because of the tragedy did not start racing until his mid-20’s so his progress as a driver has been terrific, as most drivers at Ryan’s level started young and grafted their craft through karting and junior categories.

Qualifying was next up and Ryan put in some more solid laps ending up 4th quickest only .6 second off pole position. More importantly Ryan, like the 3 cars in front, was under the existing lap record.

“I am really pleased with our speed so far this weekend” said Ryan “Phillip Island is so different to every other track in Australia with its long “European” style corners. If your car is not handling it will really show here, so whilst we have more development to do, it’s terrific to see how close we are to Steve Johnson in a car that has had over 5 years development” continued Ryan

Race 1 was run on Saturday morning and Ryan raced well finishing 3rd as Steve Johnson took another win, with the other series expert John Bowe finishing 5th showing the strength of the drivers and cars now running in the series.

Race 2 was just after lunch on Saturday and once again Ryan got into 3rd place after a dropping a couple of spots off the start. The pace at the front was amazing with Steve Johnson setting a new lap record of 1.41.3259, which was well under the lap record. Having got to 3rd Ryan had a clear run and he put in a blistering lap to catch Steve and the Rusty French owned Mustang being driven by Dunlop Super 2 star, Tom Randle.

Ryan’s lap of 1.41.3868 was only .06 of a second slower than Steve Johnson, and he was confident that he could catch them and race them.

“For race 2 we made a small adjustment to the roll centre and the Multispares Torana was flying” said Ryan. I was stoked to be catching the front two Mustangs but after closing the gap the Torana “coughed” and flooded which it had done in the trophy race so I had to switch it off.” He added.

“It turns out the after looking further, that the “magnafuel” regulator had a broke a pin, and part of the circlip jammed open the fuel reg, which flooded the engine. We are very lucky the car didn’t burn to the ground” Said Ryan after the crew had searched right through the fuel system to find the problem.

With a DNF in race 2 Ryan started race 3 from the back of the field and was fast in the traffic getting to 16th by the end of lap 1. He then moved up to 7th before being pushed off the track exiting MG hairpin. Falling back to 11th, Ryan quickly passed a few cars to eventually finished 8th.

“Phillip Island is an amazing race track and I am so pleased we showed the potential of this new Multispares Torana” said Ryan after Race 3.

“I am excited about the rest of the season and once I remind myself that the 3 or 4 cars I am racing have been developed and sorted over many race seasons by drivers at the top of their game, I’m convinced that we can honestly start to take it to them with this mighty tough looking Torana.” Ryan added.